Sikkim- A heaven to visit while alive (PART 2)

Once again, here I am with a place I fell in love with even before visiting, which usually doesn't happen, does it? :) But maybe just in this case ;)

So, I met Suren, who appeared to be a little rude to me only at the beginning, but as soon as he moved the car, true colors started showing up which were quite appealing for the fun lover like me. May be it was the company's influence :P because from that very moment onwards till the end of the trip it was just laughter, maddening, fun, bets and song& singing, which you would find common in almost all my posts. Music has officially stuck with me as I am an insanely music lover, but what you should know different here is that Suren accompanied me in this crazy singing:) so basically he was my partner in crime in almost everything and that was the best part. Here we can say like sister like brother. Well, let's move ahead,

Because of the regular landslide, most of the roads were in pathetic condition. 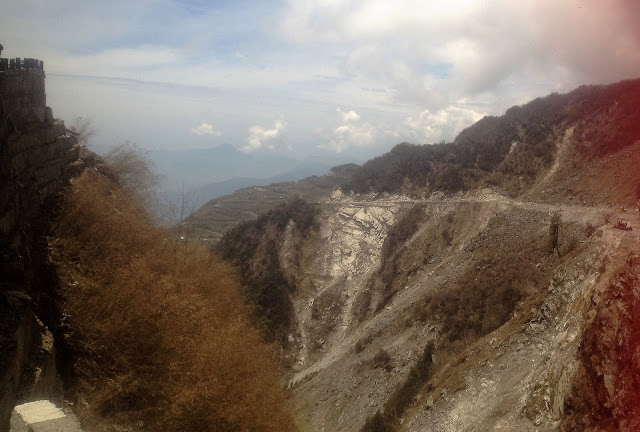 There was a long Queue and a long wait because the clean up crew was removing debris caused by the landslide.

On the way we stopped for the breakfast where I had Wyi-Wyi noodles and bread omelette. Somehow I have experienced that the same food you eat back home doesn't give you the same pleasure as it gives you when eaten outside :) and the one you don't prefer to eat at home tempts you the most when found outside mainly while traveling:). I would also like to mention that there are no fancy places to eat in Sikkim. Once you are out of Gangtok town you will only find small places which are also less in numbers, but those small places have their own charm and in fact, few of the restaurants look like cozy little homes.

After quite a few kilometers the whole scenario got changed. I had never seen this vista before. 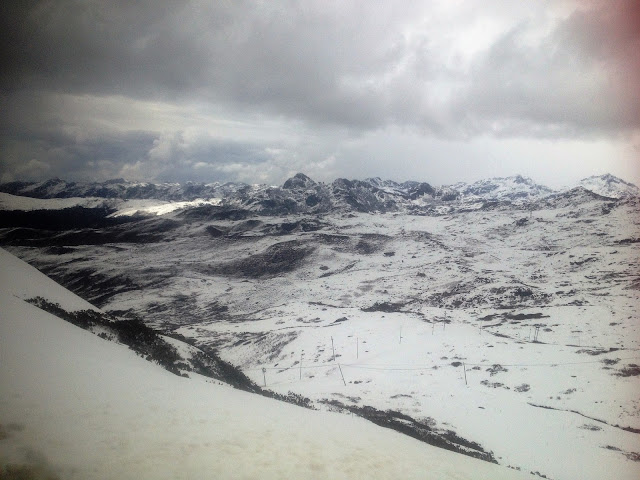 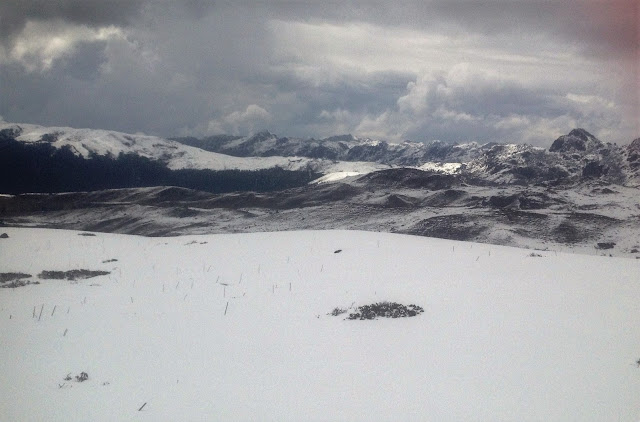 We crossed Tsogmo lake and Baba temple as we decided to keep them towards the end since Nathula would be open only till 1:30 PM and we were already running late.


Finally we were at Nathula pass

1) Nathula Pass
Nathula Pass was the place through which the famous Silk Route used to operate until 1962. This used to be a trade route between India and Tibet, which was closed down due to the Indo China War. Lines of mules used to carry silk, gold and many other items from Tibet to India and take daily essentials back to Tibet. After some 44 years of closure and a negotiation between the two countries  the old Silk Route again reopened in July 2006 allowing limited trade between India and Tibet. Items for present trade include yak
hair and tail, silk brocades, clothes, etc. However, it is limited to border trade. And the other interesting fact is that there is no “No Mans Land” there in spite of being a border check post.

Note- Nathula is situated at the high altitude so oxygen level is low there and it may make few people have breathing problem so carry candies, gums or peppermint, it should help.

Climbing up was such an adventure. A staircase leading to the border was all frozen. We all were sitting and crawling because we could not stand there though few smart people were still trying hard. People were falling even while sitting and it was so crazy and hilarious.  In such events I feel like even God becomes mischievous and adds more fun in my life.

P.S.- This above picture was cropped as up there photography is stickily prohibited and for that reference around Nathula and on the way in many places it was no photo zone mainly nearby and at the military camp area.

After reaching on top it got amazing, it was some different world around me. China was on the other side which was separated just by barbed wire fencing and you can feel like standing in the center of India and China. There were Indian soldiers guarding the border. One thing of many which I love about army people is that they are too jolly and smiley in spite of having such tough life. I didn't see any Chinese soldiers there.
The other side of Nathula Pass is the Chumbi Valley of Tibet in fact on a clear day you can see this route winding down the valley also enjoy views of Mt. Chomolhari.
Ok, now I am going to share something very secretive and it should be just between us ;). While being there at the top a brainworm inside my head woke up and I touched my one foot on the Chinese side it was so quick though. I actually took permission from the respected soldier who was standing close by because I am not that bad baby, but before he could say NO I reacted and my job was already done and the reaction I got was an open mouth in shock followed by the laughter, but I knew he kinda wanted to scold me but controlled after seeing my face, which was asking so innocently - Oops, did I do something really bad or wrong? So I would advise not to even think of doing that because it's a serious matter and stickily prohibited. There are cameras everywhere. "In my case, I was spared considering a mischievous kid and they took it so sportingly". We all actually laughed, including army men and a few tourists who were around, may be because no one else showed such guts before or stupidity would be a better word here as someone already told me that I am the dumbest. But, I shall share the feeling here that although I had been to China already as a tourist, but that feeling felt so fresh like a first and only one time experience. Though I ended up thinking for too long that what had I done.

After getting done with Nathula pass Suren suggested for the old Baba temple in Kupup instead of the new one. He also included that the way would be far more beautiful than what I had just experienced and I, being a curious person, started wondering what more I could get or ask for. But I instantly agreed as exploration and detection are my passions even though it had an extra charge. And it appeared that he was so right about the way and the views.

2) Old Baba Temple
This temple or shrine is dedicated to Baba Harbhajan Singh, who was a young soldier of the Indian Army and died in 1967. This is where his original tomb has been built. This old one has been built at the site of the bunker where Baba Harbhajan lived in, along with his colleagues during his posting in Nathula Pass. Most of his personal belongings, such as his clothes, his photographs, trunk, bedding, etc. are still preserved here. For the convenience of visitors another shrine has been built little below Nathula.
There is a very interesting story behind this. A few days later, after he got disappeared, a colleague had a dream about Baba directing him to where the body was. The body was indeed found at the exact spot mentioned in the dream and  he was cremated with full military honors. Still later, through a dream, he instructed one of his colleagues to build and maintain a shrine in his memory.
(There are mixed theories about how he died, some say he got vanished itself and some say he died in a landslide and some say he was drowned in a glacier while trying to lead a column of mules carrying supplies to a remote outpost.)
A few weeks later, at the time of ongoing war between India and China another soldier had a dream in which Baba warned of an impending attack by the enemy. It's believed that Harbhajan comes here every night as bed sheet gets crumpled every morning and his polished shoes turn muddy by the evening also that if someone doesn't pay attention to his duty he slaps him to get his alertness back.
The sentries and guards here believe that his spirit is still alive and he is therefore treated as a living being.  He has been promoted to the rank of honorary Captain. Every year during his annual leave, Harbhajan is known to visit his hometown in Punjab even today, a special reservation for the Baba is actually made and his berth left empty for the entire journey to his hometown every year and two soldiers actually accompany his uniform in a jeep up to Siliguri then in a train to his hometown. In fact, his salary is still sent to his home.
I don't know how much I believe this story because without experiencing something by-self it's hard to believe blindly, but it's very fascinating for me as a story lover also I do believe in other's beliefs and like to respect it. And I respect what Indian army is doing by keeping his memory alive and taking care of his shrine on the ground of faith. 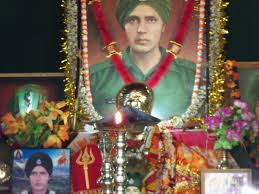 Actually a light snowfall took place a couple of times during the whole period since I reached the Nathula Pass and it was a cream on a cake.

Tsomgo means 'Source Of Water'. The lake is filled with water from melting snow coming from the surrounding mountains. It's an oval shaped lake with maximum length of the lake is 836 meters. The lake surface reflects different colors with change of seasons and is held in great reverence by the local Sikkimese people.
During summer and autumn you will see blooms of flower species of rhododendrons, primula, blue and yellow poppies, irises and other Alpine vegetation around the lake and during winter the lake becomes frozen and a snowfield. There is also a small Shiva temple on the bank of the lake. 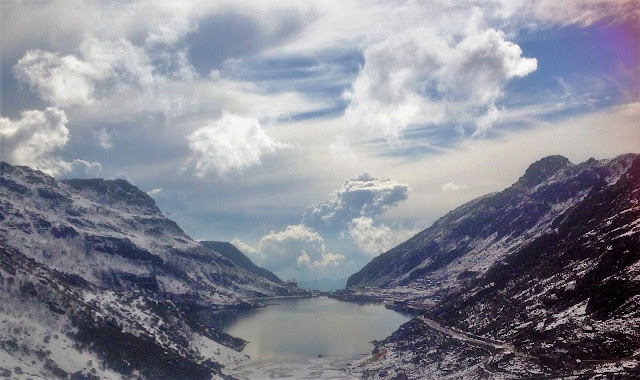 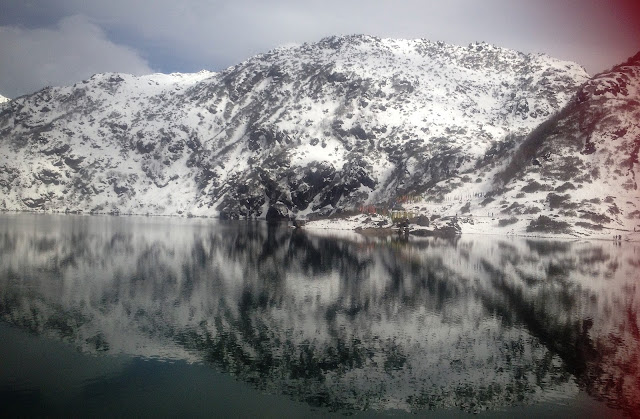 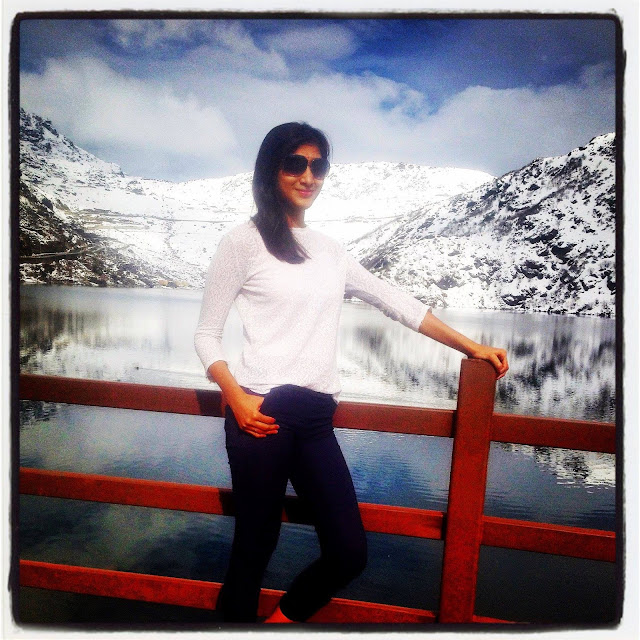 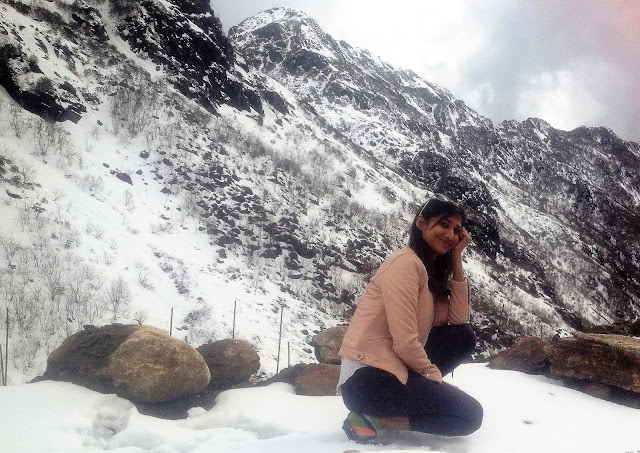 In the end I went for the yak ride to roam around and go on the other side of the lake where one cannot go walking and which was a delightful add on but by then my phone's and power bank's batteries were all dead and were resting in peace so I could not take pictures of my favorite Yak. I just love those all hairy, cozy and warm animal beings :))) even though they look little rude but they are super cute.

OMG, this post suddenly made me realize that I am such a LOVER:P

We reached back to Gangtok by late evening and later Mr Lama took me for the dinner just as a nice gesture as it was my last night in Gangtok. I had chicken thumpa which was again so damn yummy. That night I slept with a smile on the face.

A little part of me was left somewhere in this day trip, though getting lost was still left which we will know about in the 3rd part. :))))))))
To Be Continued........